The report sets out our analysis of the huge Oyu Tolgoi mining project in Mongolia, based entirely on public sources, and mainly on a 2014 Technical Report published by Turquoise Hill Resources, a subsidiary of Rio Tinto.

The main findings of OpenOil’s model and analysis are:
● The complex financing arrangements agreed between investors and the government have a major impact on the sharing of benefits across the project’s life. For example, because dividends are paid only after repaying debt the government’s 34% equity is unlikely to generate revenues for many years, and may not be worth much, unless commodity prices increase substantially.
● Viewed across the entire lifecycle of the project, starting from the development of the open pit operation in 2010, the project is much less lucrative that many commentators appear to believe.
● If the 20% withholding taxes on dividends and interest that applied in Mongolia when the Investment Agreement was signed were imposed on Oyu Tolgoi, these would add some $6.9Bn to the government’s total fiscal revenues over the life of the project.
● However, under the stabilized terms of the Investment Agreement Turquoise Hill appears able to take advantage of Mongolia’s double tax agreement with the Netherlands and eliminate these withholding taxes, even though Mongolia cancelled the treaty in 2014.
Download report
Download model 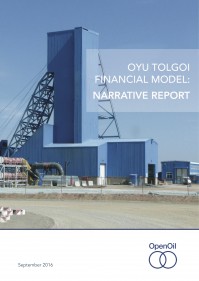