Compensating Indebted Countries for Keeping Fossil Fuels in the Ground

A innovative proposal to use industry-known techniques on asset valuation and apply them to future revenue profiles of governments with potential oil and gas projects. It could prevent up to 400 gigatonnes of carbon emissions at a cost varying between US$2 and US$10 per tonne.

The paper examines the crucial question of how to structure the value created by leaving fossil fuels in the ground in a way that keeps owner governments engaged and respects their sovereignty. It proposes a contract between international creditors and the government to leave certain oil and gas reserves in the ground for an initial 10-year period. In exchange, a participating government would receive debt relief corresponding to a signature bonus and a series of annual payments. The mechanism allows for an opt-in at the level of the individual assets (oil and gas fields).

Such an approach globally could prevent up to 400 gigatonnes of carbon emissions at a cost varying between US$2 and US$10 per tonne, just among the so-called new producer countries. It could also provide a precedent with the power to challenge the idea of fossil fuel-led economic development, which still prevails among many political elites around the world, despite clear signs that this era is coming to an end.
Download 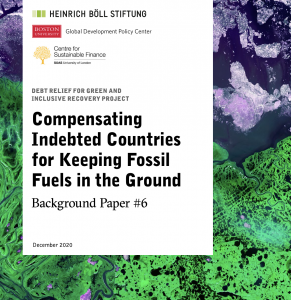