Aramco: the future relationship with the Saudi state

The world's most profitable company... is still first and foremost a policy tool

The second paper on the partial flotation of Saudi Aramco deals with the future of the relationship between the company and the Kingdom of Saudi Arabia (KSA). It uses a discounted cash flow (DCF) model and Aramco’s own assumptions to build a simulation of Aramco’s revenue and free cash flows, and an IMF report on the Saudi economy to examine the ongoing relationship between the oil rents generated by Aramco, and KSA public finances. The model maps some of these elements more precisely, and quantifies the relationship between various elements in Saudi Arabia’s political economy and Aramco. Leading conclusions are:
• Aramco enjoys a considerable edge in terms of durability and profitability compared to other oil companies because of its low cast base. This seems to have formed the basis of KSA guidance on price, aiming for a high valuation.
• Fiscal regime changes introduced in the months before the IPO increase Aramco’s share of revenues by reducing the base rate for royalties from 20% to 15%, and cutting also the corporate income tax rate to 50% in the upstream. But the new regime is more fiscally progressive than the old one and the difference thins out as prices rise. So investor upside is capped.
• But investors would face a different pressure at low prices: Saudi public finances. Since oil dropped from a long period of high prices 2010-14 the government’s foreign reserves have run down and interest rates have slowly crept up, creating considerable economic tension. The base scenario in the latest IMF report predicts Saudi Arabia will continue to run fiscal deficits totaling over $300 billion in the next five years. But if prices were lower, the fiscal gap could widen still further. That would place the government in the position of choosing between maintaining free cash flow within Aramco, which it will still control, and finding ways to extract it to try and relieve pressure on exchange and interest rates, both of which are politically sensitive.
• An easy mechanism exists in the form of the Equalisation process – the mechanism by which the Saudi government is supposed to compensate Aramco for loss of revenues on the third of its production which is sold on the domestic market at sub-market prices. The government could simply withhold payment of funds which are likely to be in the tens of billions of dollars a year over the coming period. This would effectively short Aramco’s outside investors.
• The government needs an oil price of $81-$82 to avoid further public debt.
• The government has declared a $75 billion dividend for Aramco’s first year as a partly privatized company. Sustaining a pro rata dividend of that kind for the 1.5% privately held stake would cost a billion dollars a year in total. But it would be unlikely to be sustainable on any kind of larger scale if oil prices stay low in the coming few years. 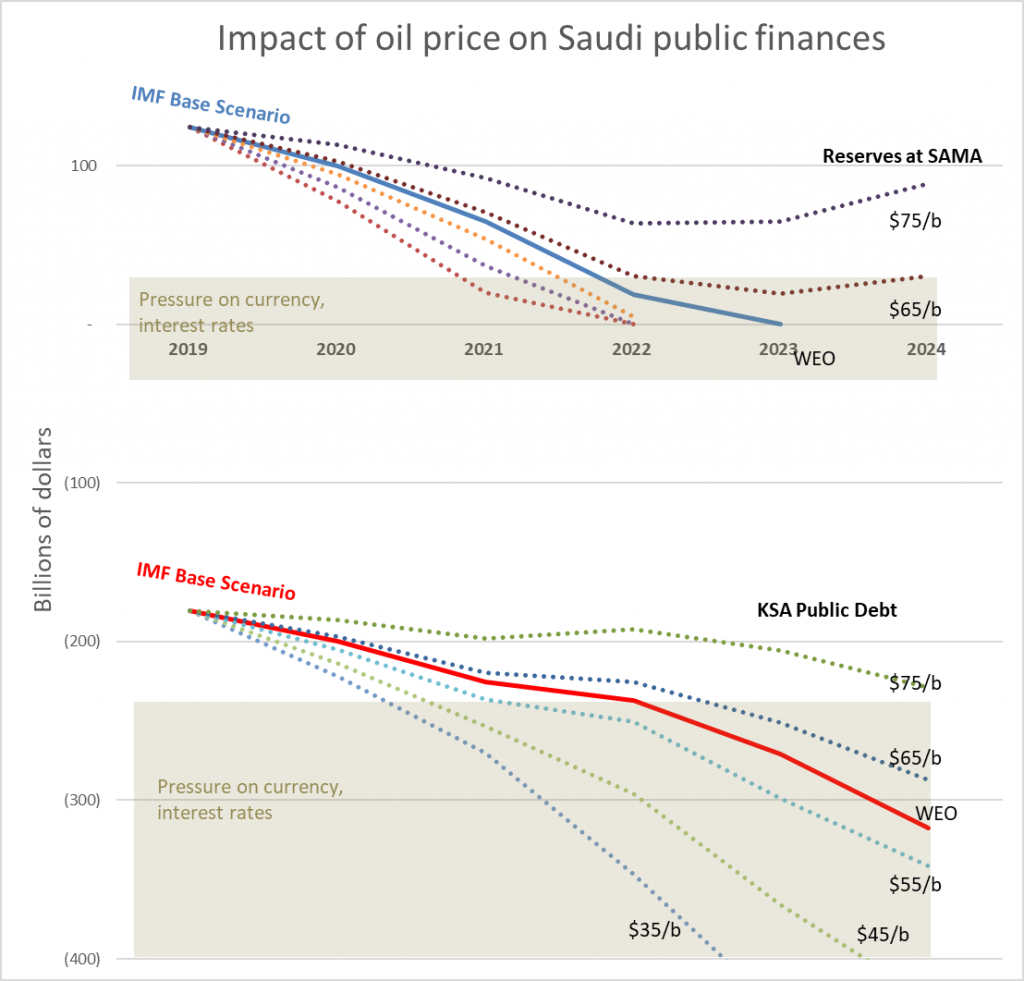