The partial flotation of Saudi Aramco has been billed as the biggest Initial Public Offering in history, based on the determination of the Saudi government to achieve a record valuation. Throughout the run up to the flotation, the government’s preferred valuation was at $2 trillion. Perceiving resistance among international investors to this price level, this was adjusted down to $1.7 trillion in initial price guidance offered as the subscription got underway. This paper uses a discounted cash flow (DCF) model and Aramco’s own assumptions to assess the many other valuation figures that have entered public domain. Our findings show that if two key parameters are modestly adjusted, Aramco’s valuation will almost halve, to under $900 billion.
● A key and underexplored determinant of value is when oil demand peaks – if this is in the mid-2020s half a trillion dollars is lost from the valuation.
● The lower bound of analyst valuations assume project-level discount rates of around 10% rather than Aramco’s desired 5%-6% “corporate yield”.
● Any energy transition effect on oil pricing creates a hard cap on Aramco value.
● Value in all scenarios is driven by the period between now and 2030 – more than half of Aramco’s stated reserves could be stranded without having any impact. So it is possible the market is already pricing in energy transition views on future oil price without making that explicit.
Download report
Download model 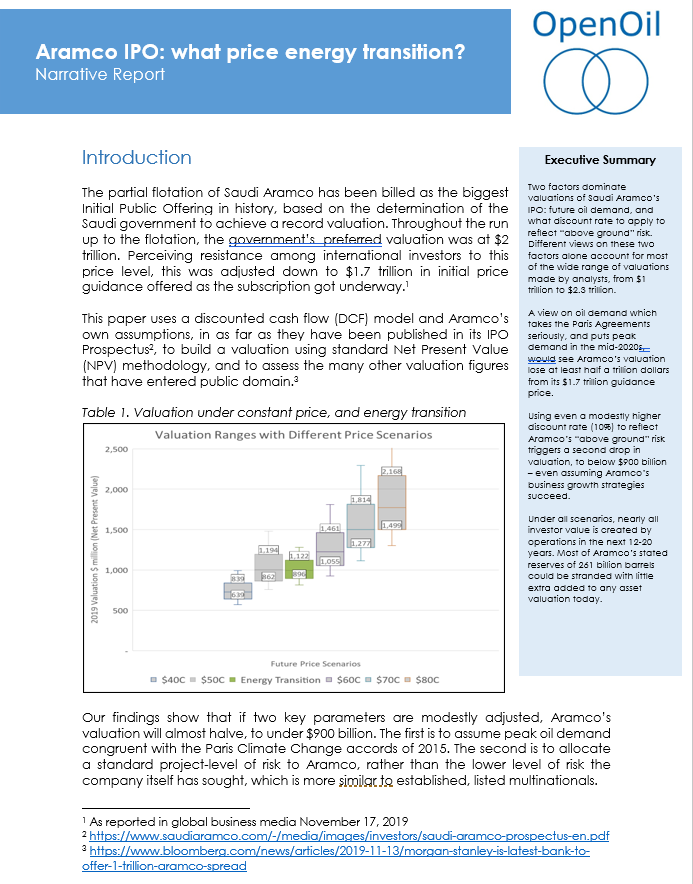