Agyapa Royalties Limited: a brief on potential valuation of the IPO

The decision by the government in Ghana to create a royalties company to manage most of its royalties from the industrial gold sector, and float nearly half of it to private investors, has caused a lot of controversy, especially since Parliament decided to approve the agreement in August amid complaints from the opposition and other sectors.

A number of questions have been raised, and much has been written, on issues ranging from valuation to future fiscal policy to transparency. Open Oil's analysis focuses principally on the valuation of shares of Agyapa Royalties Limited and whether it is undervalued, overvalued or the known valuation figures seem to be "fair" for the country.

Based on a discounted cash flow financial model, our analysis concludes that the guidance range for the value of 49% of Agyapa shares, of between $500 million and $750 million, looks to be low, and the shares undervalued.  The Open Oil model suggests Agyapa 49% valuation, if made on the spot price of gold today , could be worth US$ 1.47 billion, this number is comparable with the valuation known by Parliament members.

This study  was commissioned by the EITI International Secretariat in consultation with Ghana EITI (GHEITI).  Its contents are the sole responsibility of the author and can in no way be taken to reflect the views and positions of the EITI nor GHEITI.
Download report
Download model 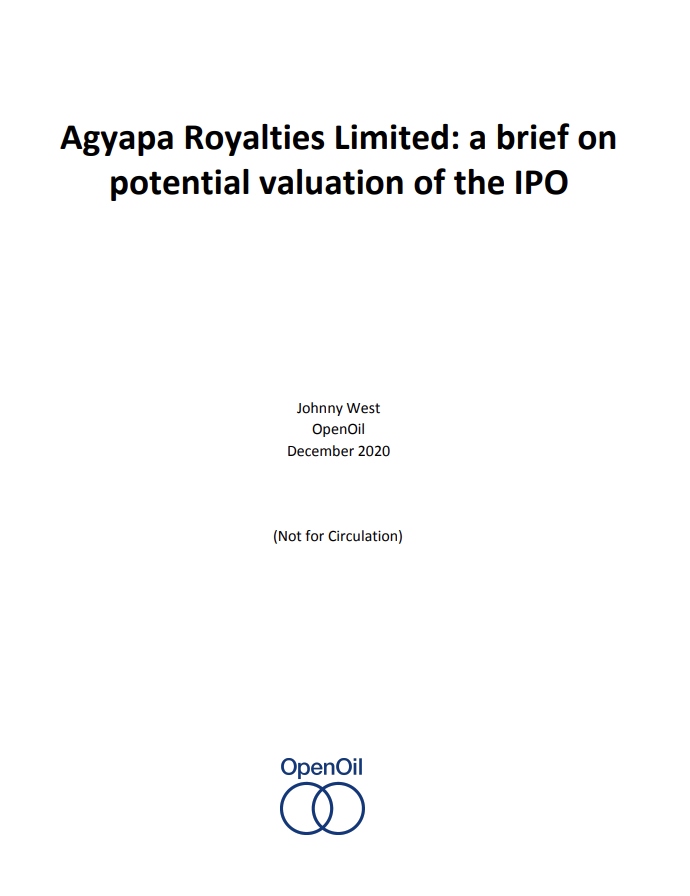