Brazil’s Libra project is an offshore oilfield that could produce 1.3 million BOPD. But the consortium signed the PSC expecting higher oil prices. With current oil prices ($50 a barrel in Oct. 2016), Libra is unviable unless costs can be reduced significantly, and/or the fiscal regime is renegotiated – particularly the royalty. The project schedule has already slipped – which we think reflects theses challenges – and it may slip further.

● In middle scenario pre-tax IRR is 18.4%, after-tax IRR is 7.0%, and NPV8 is negative at current oil prices ($50 per barrel, October 2016)
● Breakeven is at around $54 a barrel for the middle scenario (production of 10 billion barrels)
● At low oil prices the royalty is highly regressive
● Capex would need to be cut to achieve profitability
● Given all of the above, the project will likely need to have terms and schedule revised
Download report
Download model 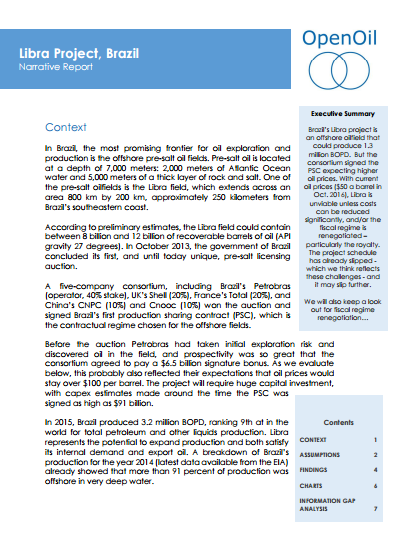